Qatar hosts the event of Doha, Capital of Islamic Culture in 2021 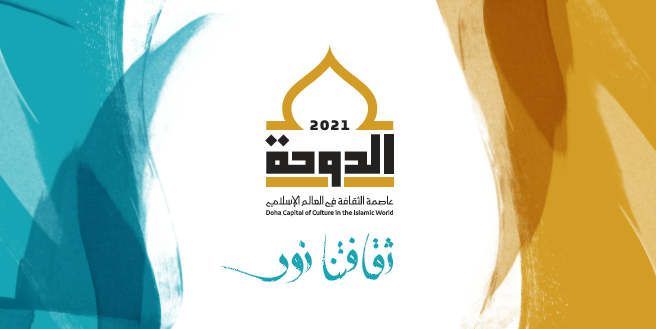 Under the kind patronage of His Highness

Qatar hosts the event of “Doha, Capital of Islamic Culture in 2021”

Under the kind patronage of His Highness Sheikh Tamim bin Hamad Al Thani, Emir of the country, the State of Qatar will host the event of “Doha, Capital of Culture in the Islamic World in 2021”. The event will be under the slogan of “Our Culture is Enlightenment”.

The slogan “Our Culture is Enlightenment” was chosen as a symbol of Doha, Capital of Islamic Culture in 2021, believing that every nation has a culture that distinguishes it from others. Indeed, the Islamic culture has an inherent value that has its uniqueness within the world’s cultures. It is vibrant as long as it is inspired by the eternal Islamic values ​​that brought humanity out of darkness into light and gave man cognition, knowledge and dignity. The Islamic culture has traveled through centuries in growth and development, interacting with others, being influencing at times and being influenced in other times to set up reason and conscience in order to achieve urbanization. If culture is prosperous, then it results in prosperity of the nation, and vice versa.

The Islamic culture succeeded in the past in assimilating different cultures through the ages and to form from its diversity an authentic unity harmonizing with the main sources of this culture. It is now time for the Islamic culture to regain its valuable motives in order to innovate again, and to think about the future as much as it thinks about the past and the present in order to reach the essence of its eternal message.

As a result of the long history and heritage of Doha and the cultural characteristics of the State of Qatar as well as the variety of Islamic monuments that reflect the Islamic character, the Islamic Educational, Scientific and Cultural Organization “ISESCO” granted Doha the hosting of “Doha, Capital of Culture in the Islamic World in 2021”. Doha’s hosting of the Islamic event strengthens the bonds of friendship and respect that bind the State of Qatar with the world, especially the Islamic world countries. Indeed, Doha is a land of dialogue and a meeting place of cultures and openness to civilizations. The events of Doha, Capital of Culture in the Islamic World 2021, represent an opportunity to highlight the cultural diversity, the historical monuments, and the human values ​​of Qatar’s culture and ancient history.

Hosting the event of “Doha, Capital of Culture in the Islamic World” aims at promoting eternal Islamic values, especially those based on science and human dignity. In fact, this event seeks to reinforce Islamic cultural heritage in an interconnected digital world and also to encourage creativity and innovation as civilized values ​​that enrich Islamic civilization. Furthermore, it drives at inspiring Muslim generations to enrich the cultural scene through a productive and effective role at the global level and focusing on cultural diversity as an added value for Islamic countries and Islamic culture in general. Last but not least, the hosting of “Doha, Capital of Culture in the Islamic World” intends to introduce the cultural experience of the State of Qatar, and the efforts made to promote Islamic culture.

Hamad Al-Adhba, general coordinator of the events of “Doha, Capital of Culture in the Islamic World”, said: “The nomination of Doha, Capital of Islamic Culture in the Islamic world in 2021 came after it met the conditions that make Doha a shining Islamic beacon in the Arab and Islamic world. In fact, the State of Qatar is one of the countries that are particularly interested in Islamic heritage and archaeological history in general, through the restoration of a number of archaeological areas in the country and looking after them. Moreover, Doha is constantly interested to create archives of Islamic monuments through which it displays everything related to the Islamic monuments, as is the case in the Museum of Islamic Art, which has Islamic artifacts and other historical pieces that talk about centuries Past.

Al-Adhba affirmed that choosing Doha as Capital of Culture in the Islamic World in 2021 is a recognition of its cultural and Islamic heritage, in addition to its contribution in civilization, with regard to its numerous cultural and Islamic monuments and landmarks it embraces. Choosing Doha to host this event is also an evidence of its nobility and the authenticity of its people, as well as the cultural richness that distinguishes its eternal Islamic monuments.

He also pointed out that the decision of the Conference of Culture Ministers of the Member Countries of the Organization of Islamic Cooperation, which chose Doha to be Capital of Islamic Culture in 2021, came with the certainty that Doha deserves to host this year because of its ancient and Islamic heritage landmarks, and the ability to magnetize tourists from different countries of the world.

Al-Adhba noted also that: “Undoubtedly, the program prepared by the Ministry of Culture and Sports aims to push and develop a new tourism pattern based on investing in the architectural heritage of Doha, which is preparing to be able to attract and accommodate visitors from Islamic countries to reside in Doha and see the beauty of its monuments and streets.”

Hamad Al-Adhba explained that the program also aims to attract Arab citizens to discover historical Islamic monuments in all the cities of Doha, which include landmarks classified on the UNESCO world heritage list. Indeed, the State of Qatar represents a unique model in the Arab-Islamic civilization, and it is obviously distinguishable for centuries.

He stressed that Doha is preparing to host the 2022 World Cup, and the world is watching with interest the construction boom and the transformation it has made in a short period in various fields, especially in infrastructure. It also provides a model in the building of society and the state, and it has also enriched the human civilization over the ages.

The selection of the capitals of Islamic culture comes according to precise criteria taking into account that the cultural capital is of historical heritage and cultural distinction through which it has assumed a prominent position among countries and the region, and that it has a distinct contribution to enriching Islamic culture. Doha was chosen as part of the program of accreditation of capitals at the Sixth Islamic Conference of Culture Ministers held in Baku in October 2009.

Dr. Hamda Hassan Al-Sulaiti, Secretary General of the Qatari National Commission for Education, Culture and Science – said that the hosting of Doha, Capital of Culture in the Islamic World enhances the efforts of the State of Qatar’s to spread Islamic and human culture in the largest possible areas of Arab and Islamic countries and the world.  the beginning of this program, which was issued from Doha twenty years ago when the Third Islamic Conference of Culture Ministers, held in Doha in 2001, approved the draft Capitals of Culture Program for the Islamic World. The program provides for the nomination of cities of three cultural capitals of the Islamic world every year representing the three Arab, Asian and African regions. The list of capitals of culture for the Islamic world for the period from 2005-2025 had been accredited during the Ninth Islamic Conference of Culture Ministers, which was held in Muscat, Sultanate of Oman, in 2015.

She emphasized that Doha has met all the conditions and criteria stipulated by the organization for its selection as the capital of Islamic culture, and among these criteria is that it should be a city with a written historical heritage, a wide scientific reputation, and has distinguished contributions in the fields of culture and in the humanitarian fields through scientific work. There are scientific research centers, manuscript libraries, archaeological centers and cultural institutions active in the field of revitalizing cultural life. Dr. Hamda explained that the opening ceremony will be on the eighth of March 2021, and there will be an agenda full of various programs and events.

Faisal Al-Suwaidi said: “The Ministry of Culture and Sports seeks, through its 2018-2022 strategy period, to provide a developing cultural environment and incubator for the talents of the Qatari society and to accumulate its capabilities in a national renaissance project that would move the country to the range of developed and civilized countries, making the State of Qatar a cultural role model regionally and internationally.”

He added that the Ministry of Culture is establishing a cultural system based life perspectives that lead society to establish a civilized pattern that is reflected in the interactions of its members with each other in various aspects of life. It includes the perspective toward human, toward time, toward science, toward life, toward nature, and toward the other.

He pointed out that the Ministry’s strategy has determined its orientation in the cultural field by enhancing the role of culture as a framework for preserving identity and promoting citizenship and civilized communication. In fact, the Ministry of Culture and Sports is working on activating the role of the cultural scene by sponsoring and supporting cultural production that aims to enhance the components of the national identity by developing attractive cultural activities that raise the level of community cultural participation. Furthermore, the Ministry of Culture and Sports is working on discovering and nurturing cultural talents, increasing cultural production that enhances the national identity, and organizing events that contribute to increasing cultural communication with resident communities, as well as working on enhancing the cultural position of the State of Qatar regionally and internationally. In addition to that, it is working on protecting heritage and encouraging an increase in the knowledge of society members.

All the parties within the state, including strategic partners and participating parties, interacted to prepare more than 70 various activities. This participation reflects the challenges Doha is facing in the current health conditions that did not prevent Doha to continue working and fulfilling the promise.

It is worth noting that the cooperation and partnership between the State of Qatar and the Organization of Islamic Cooperation comes back to the first day of Qatar’s accession in 1972 and the participation of Qatar in many different occasions. In fact, it is a confirmation of the Qatari leadership’s keenness to support the organization and make all efforts to remain incubator and supportive of the causes of the Islamic nation in all parts of the world.

It is noteworthy that the Islamic World Organization for Education, Science and Culture “ISESCO” is a specialized organization working within the framework of the Organization of Islamic Cooperation, based in Rabat, in Morocco. The organization was established pursuant to the resolution issued by the Third Islamic Summit Conference in Makkah in January 1981. It includes 52 Islamic country in the group of the member states of the Organization of Islamic Cooperation. It is concerned with enhancing and strengthening the cooperation among the member states in the fields of education, culture, science and communication.